Beak of the Week: American Oystercatcher 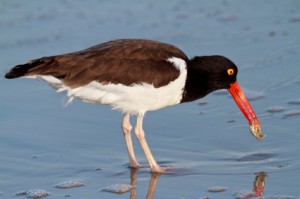 An American Oystercatcher plucks a Moles Crab out of the sand.

Allow me to introduce to you the American Oystercatcher! The long, vibrant reddish-orange beak and yellow, red-ringed eyes of this large, otherwise neutrally colored, shorebird are so striking it is hard to pass this beauty by without taking a second look. As an easily identifiable bird, the American Oystercatcher is a great place to start when learning about shorebirds. 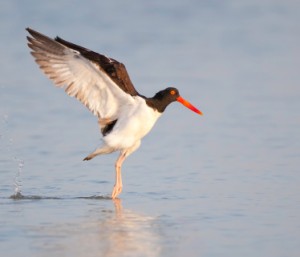 Diet: As its name suggests, the American Oystercatcher feeds on oysters and other bivalves and invertebrates.  These include mussels, clams, starfish, limpets, jellyfish, etc.

Conservation Status: Although generally considered of least concern, the American Oystercatcher is listed as bird of special concern in many coastal states on account of habitat loss and vulnerability issues. We are reminded to enjoy these gorgeous shorebirds from afar in order to avoid disturbing them. 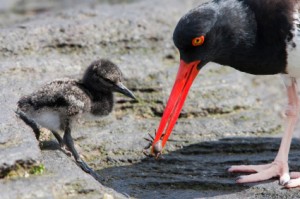