Beak of the Week: Lincoln’s Sparrow

We are all familiar with the “brown birds.” You know, the seemingly boring ones that may appear slightly different from one another, but are all classified simply as: Sparrows. Well, as lovers of color and art, we completely understand the lack of enthusiasm that some might feel toward these comparatively less stunning creatures. However, with a little more insight, these little brown birds, or “LBB” as some like to call them, become that much more fascinating. Not to mention, distinguishing one from another really tests your eye! 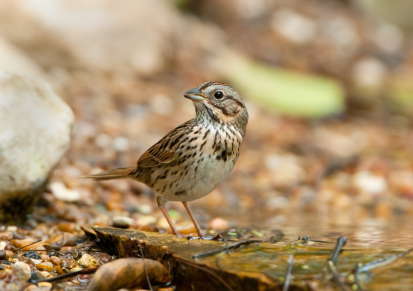 The Lincoln’s Sparrow is a member of the genus Melospiza, which is renowned for its singing ability. In fact, Audubon once said “we found more wildness about this species than any other inhabiting the same country” referring to the Labrador expedition on which the Lincoln’s sparrow was discovered. (http://www.dnr.state.oh.us)

Range:  Summers throughout Canada. Winters in the Southern United States and Central America. Migrates through the majority of the US.

Diet: Mostly insects during the summer. During the winter, they eat small seeds and invertebrates.

Thanks to a YouTube video by WingsPhotography, we can listen to the delightful voice of the Lincoln’s Sparrow in Greensboro, Vermont.