Beak of the Week: Whimbrel

The Whimbrel is a shorebird abundant throughout most of the world.  It was one of the first shorebirds I came to know. In fact, the Whimbrel was the first bird that made me stop and really appreciate widespread migratory species.  You see, like most birders, I love the thrill of going to foreign places and having the opportunity to spot new and exciting species. However, I just find something really special about seeing those familiar birds that exist both at home and in places otherwise foreign to us.  For me, there is something warm and fuzzy about seeing a familiar face while abroad.  It’s like spotting an old friend while on vacation!  It’s even nicer in places where identification is challenging due to my unfamiliarity with local species.  It makes me want to shout “I know you!” Whimbrels, no matter where I am, never fail to bring about a childlike smile across my face and make me feel right at home… 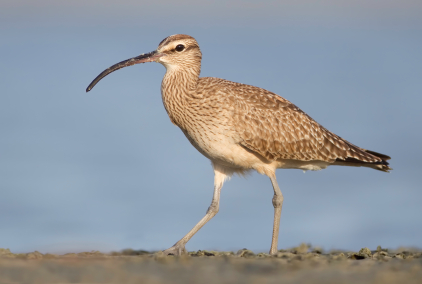 As one of the most widespread of the curlews, the Whimbrel, a fairly large wader, is mainly grey/brown.  Its’ back and rump are white and it has a long curved bill. The Whimbrel’s central crown stripe, strong supercilia and smaller size help to differentiate   it from the larger curlews.

Range: This migratory species winters on coasts in Africa, South America, Asia, Australasia and southern North America. It breeds in America, Asia, Europe and across and the subarctic North.

Habitat: Breeds in various tundra habitats.  In migration, Whimbrels tend to frequent various coastal and inland habitats, like fields and beaches. They winter in tidal flats and on shorelines.

Diet:  Whimbrels mainly feast on marine invertebrates; however, they’ll also eat insects and berries.  In many regions, the primary winter food of the Whimbrel is crab. 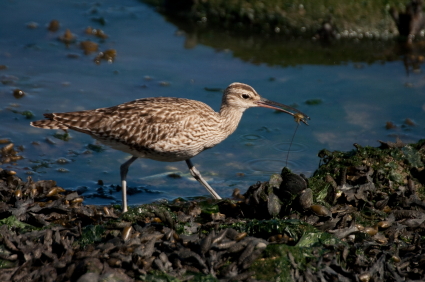